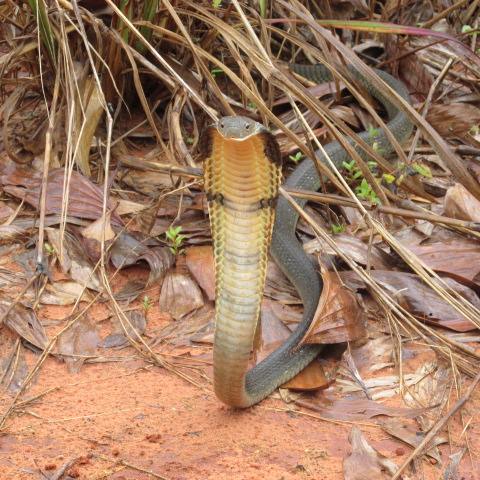 I was told about a king cobra the other week that I don’t want to forget about. The story is incredible.

So I live in Krabi in the South of Thailand it is south of Surrathani. It is east of Phuket and Northeast of Trang.

I was called by a friend who asked me if I could go get a cobra at somebody’s house. Apparently this lady had many snakes at her house over the months that my friend was catching them for her.

He usually went to get the snake or one of our other friends would go to get them for her but both of them were busy and I was the only option except calling the snake show. I hope by now we all know what happens when the snakes go to the snake show.

I got on the motorbike with a snake bag and with a hook and went toward Ao Nang. Google lost me twice. I was in construction areas. It was completely wrong.

Finally I found the place and it’s a massive complex, you know for Thailand. It’s in a housing area sort of like an old area and it’s a yoga place.

The woman has regular yoga classes and has been doing it for many years. It’s a one story area so it’s all spread out across some land.

There are many doors leading into the common areas like the swimming pool, the yoga place, to her backyard, etc. Everything is enclosed in a wooden fence.

She has about five Chihuahuas and about five golden labradors or labrador retrievers. The dogs are all nice and can be calmed down whenever I arrive, but still it’s a little crazy every time I show up with snake hooks and a bag and the dogs start barking like mad for a while.

She sometimes has the snakes in a black garbage bin with a plastic lid that locks loosely onto the top. She has become quite good at catching the small ones by herself because they often disappear when I am on my way or somebody else is coming to do the snake rescue.

When I was there about a week ago she told me a story about what happened to her years ago so here it is.

Read the story below, and if you want more King Cobra info I have about 10 articles about various King Cobra topics here.

She was doing a yoga class and she had what seems to me like about eight or 10 students.

They were all sitting on the floor and there was a period of meditation where peoples eyes were supposed to be closed and she was at the front facing the group and the group was all looking back at her.

She was guiding them into some relaxed state and the front door for the yoga business was open and that was behind the students where they were sitting.

Everyone’s eyes were closed and she was guiding them and she opened her eyes and she saw a snake come through the back door.

It was a HUGE SNAKE.

It wasn’t just any snake, it was a massive 3 meter or more cobra. It was a king cobra as she found out later. She didn’t want to alarm the students and have them jump up right away because the snake was already very close to them so she didn’t say anything she just watched the snake crawl into the area where everyone was sitting!

As it did, her stress levels rose incredibly because she realized it was a cobra probably a king cobra and didn’t know what to do because now the snake was in the middle of the group and she didn’t want them to jump up and get bitten.

She told them to keep their eyes closed and that they may feel something and it’s just a the spirit the way it moves or something.

I’m not sure what what kind of yoga class it is or meditation class but she has a style or some thing that that incorporates you know spirits and naturalist ideas and I’m not sure what else.

I don’t know how to explain it but somehow she was able to keep the students calm even as the king cobra crawled over some of their laps!

She told the students over and over to keep their eyes closed and focus on some thing about the meditation. Amazingly, all of the students did this and did not freak out when the cobra climbed over them.

Maybe some of them thought it was some sort of a test of concentration. I can’t imagine that nobody would open their eyes and see the cobra and scream. But that’s what happened.

Eventually the snake moved away from the whole group and she was able to tell them what was going on.

It’s a crazy story, right? I don’t doubt that it happened because when people are very still it is like the snakes don’t register that they are alive and could be a threat.

It is definitely a problem in their brains that evolution didn’t solve yet. All you need to do to de-escalate a threat from a snake is to stand very still and the snake doesn’t see you as a threat anymore. In most cases anyway.

So, that is the story. I have been to this woman’s house now about four times and every time she had a monocled cobra in her house. The dogs do a great job of warning her about snakes so she is alive today because of that.

The snake I took from her house last night was nearly 2m long a monocled cobra. It had a lot of energy and it was very thick and strong and I could barely hold it with my snake tongs.

I have seen monocled cobra bites that were quite bad. And I have heard stories from people who had loved ones die from cobra bites here in Krabi. It is one snake that you really shouldn’t take any chances with.