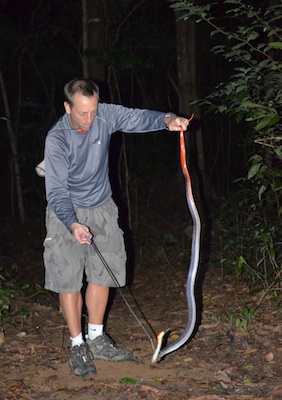 One of the coolest snakes in Thailand is the red-headed krait (Bungarus flaviceps). They are beautiful snakes with red head, a blue/black hued body and red tail.

Where in Thailand to Find the Red-Headed Krait?

I was just sent an email by a photographer asking where he could find this amazing snake. Though the red-headed krait is found in many locations, they are not easy to find in Thailand (anywhere?) and really hard to target to find in a couple of nights while you’re on vacation looking for one.

They have been found all over the south of Thailand. I know of this species being caught in Khao Sok, Surat, Krabi, Trang, Nakhon Si Thammarat, and Satun province. But there have been many sightings and photos of it found elsewhere.

Here in Krabi and Trang they tend to prefer dense rainforest with hills and streams. A number of records were found along water-filled streams, but also dry rockbeds where streams flowed during rainy season. I know of them being found as high as 1200+ meters elevation and 40 asl.

Red-headed Kraits are really rare and a very hard species to target in Thailand.

I’ve seen only five red-headed kraits in fifteen years of looking for snakes. If you’re dying to find this snake in the wild you should plan to stay a few weeks in national parks in southern Thailand and look at night around the habitat I mentioned.

The Best Way to Find the Red-headed Krait?

If you want to try to target one, you can contact Mint – a Thai guide in Khao Sok National Park in Suratthani. He seems to be able to find them more than anyone else I know. It may be the same snake over and over, but hey, at least you get to see one in the wild.

The big adult red-headed krait we found in the Trang rainforest early one morning (1:30 am.) remains one of the most iconic snakes I’ve ever seen in the country. Almost 2m long, strong, brilliant colors, and with potentially deadly bites – it had my heart racing from the time I first saw it.

Bungarus flaviceps is truly one of Thailand’s most amazing venomous snake species!

I hope you get to see one, but it may require repeated visits.