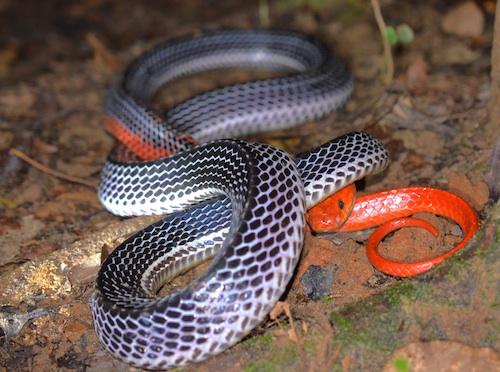 Length: These kraits grow to about 2 meters long, though most adults found are shorter.

Appearance: Somewhat pronounced vertebral ridge, which differentiates from the Malayan Blue Coral Snake (Calliophis bivurgata). Body is black or dark grey, the head and tail are bright red or orange. The tail on the venter is also the same color. The rest of the venter is creme to white-colored. The head is more distinct from the neck than C. bivirgata. Dorsal scale count: 13-13-13.

Range: In Thailand, the Red-headed Krait is only found in the southern Thailand provinces from Ratchaburi and southward. Across the globe, they are most heavily concentrated in Malaysia, Borneo, and a couple of other places. Recently I found a large 1.9-meter specimen in the rainforest in the Trang province. I have also found them in Surat Thani, and Krabi provinces.

Habitat: Lowlands and hilly rainforest type habitat. The last four of these snakes I saw were all found at less than 200 meters elevation.

Active Time? Probably active both at night and day. Three of four of these snakes in our local area were found during the daylight.

Food: Some say the red-headed kraits eat more frogs, lizards, eggs, and rodents than other snakes. Probably they are opportunistic and eat whatever presents itself.

Defensive Behavior: Of the four snakes examined – none struck out, none attempted to bite at all. Note – all but one was handled during daylight hours.

Venom Toxicity: Venomous, and deadly. The venom has been shown to have an LD50 subcutaneous measurement of .35 mg/kg for Bungarus flaviceps, while Bungarus candidus (Malayan Krait) was .32 mg/kg, and Bungarus fasciatus (Banded Krait), .62 mg/kg and less than that in another study. This makes it one of the top venomous snakes on the planet and within the top three most venomous in Thailand. The black mamba is listed at the same .32 mg/kg by venom researcher, Dr. Bryan Grieg Fry at his site. (well, now he pulled down his chart). Only 10 other terrestrial snakes in the world were listed with more potent venom. Little is known of the this venom’s effect on humans after a bite, though it is likely very similar to a bite from Bungarus candidus, I could find no treatment studies due to bites being quite rare by this krait species.

From the abstract of a recent (2/2010) venom study in Malaysia: Bungarus flaviceps (red-headed krait) venom presents an intravenous LD50 of 0.32 μg/g and exhibits enzymatic activities similar to other Bungarus toxins. ELISA cross-reactions between anti-Bungarus flaviceps and a variety of elapid and viperid venoms were observed in the current study. Double-sandwich ELISA was highly specific, since anti- B. flaviceps serum did not cross-react with any tested venom, indicating that this assay can be used for species diagnosis in B. flaviceps bites. In the indirect ELISA, anti- B. flaviceps serum cross-reacted moderately with three different Bungarus venoms (9-18%) and Notechis scutatus venom, but minimally with other elapid and viperid toxins. The results indicated that B. flaviceps venom shares common epitopes with other Bungarus species as well as with N. scutatus. The lethality of the B. flaviceps venom was neutralized effectively by antiserum prepared against B. candidus and B. flaviceps toxins and a commercial bivalent elapid antivenom prepared against B. multicinctus and Naja naja atra venoms, but was not neutralized by commercial antivenoms prepared against Thai cobra, king cobra and banded krait. These data also suggested that the major lethal toxins of B. flaviceps venom are similar to those found in B. multicinctus and B. candidus venoms.

Treatment Summary: Envenomation can produce moderate to severe flaccid paralysis, and respiratory failure requiring intubation and ventilation in severe cases. Antivenom available for major species (detailed below), could potentially prevent worsening of paralysis, but may not reverse established paralysis.

Offspring: Two clutches from two adult female red-headed kraits were studied by Chulalongkorn University scientists in Bangkok. One clutch was four eggs, and the other, six eggs. After 81-84 days in incubation at 26-27C and the other clutch at 30-32C eggs hatched. Fewer eggs hatched at the higher temperature incubation. The average hatchling length was 28.9cm +/- .8cm measured from snout to vent. Weight of each was 7.2 to 7.8 grams. Humidity in the incubation enclosures was 60-70%. After 7-10 days all snakes had shed.

Notes: I have seen four of these kraits, and they are quite incredible to find in the wild considering how rare they are. Bungarus flaviceps has not been studied very well, and I suspect that most of the information on Wikipedia and other information sources has been generalized from other Thailand kraits like the Blue Krait (Bungarus candidus) and Many Banded Krait (Bungarus multicinctus) because the wording seems too similar to be by chance. There are a number of Malayan Blue Coral snakes misidentified on Youtube videos, and on Wikipedia.

These snakes have not been studied well in captivity or in the wild, except for the previously mentioned study in which the kraits lived surprisingly long. Usually, the literature shows the red-headed krait dies quickly in captivity. These kraits are not known to bite during the daytime, but, be exceptionally careful when handling them.

Substrate: Best? Leaves and something large to hide underwood is best, rocks, something solid.

7/25/13 Update. At 11:30 pm in a Thailand National Park in Trang Province, a friend and I found a large 1.9+ meter long Bungarus flaviceps on the trail and photographed and shot video of it. Video #1 is of this snake. The photos on this page are all of the same snake. As with all snakes found, it was released in the same spot as where it was found.

Classified by Reinhardt, in year, 1843