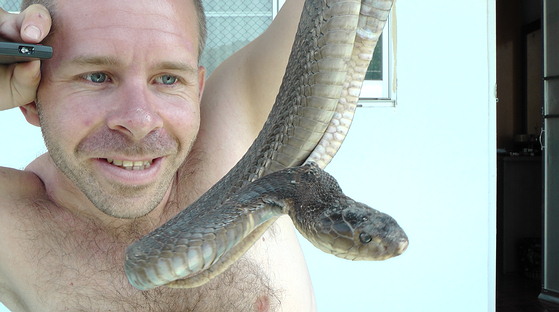 I met this guy “Henning” through this site – he sent me an email requesting ID of a juvenile snake that we figured out after a couple days… a juvenile sunbeam snake. Now we’ve been writing back and forth many times and I’ve come to know him a little bit.

Henning is from Norway. He’s here in Thailand about 6 months out of the year.

Henning is an obsessed snake herper – even more than me. He puts more hours into snake hunting than anyone else in the country while he’s here. That is no exaggeration. He’s out in the field 12 hours per day sometimes!

He finds lots of snakes – he’s always sending me photos of what he found recently – even NOW when the weather is bad for snakes – he’s finding them. The guy has incredible luck – but, he’s tenacious. He keeps going until he gets the snake.

Early on – he got sprayed by a spitting cobra while hunting snakes in the jungle. He got a video of it too – one of the only videos on Youtube of such a thing. He ended up rinsing out his eye and getting to the hospital – they cleaned it – and he’s OK. Said it burned like hell though.

Henning’s spitting cobra got him in the eye video ->

While you’re at it – check out this slow motion video of this cobra spitting .

Henning is in and around the Hua Hin area.

Now wait… that’s not all.

Henning is reckless as all hell. He was catching cobras before he knew what they were. Currently he’s trying to tame a Naja kaouthia – monocled cobra – so he can hand-hold it. I have warned him MANY times – and yet, the guy is not easily talked out of what he wants to do.

If you go with him on a snake hunt – don’t do like he does… But do bring a video camera.

He’s reading this I know – so I can joke about him and I think he’ll be OK with it.

If your passion is Thailand snakes and you live in or will be in that area of the country and want to go herping with him – let me know and I’ll put you in touch with him. Or you can find him through that video above at his YouTube channel.