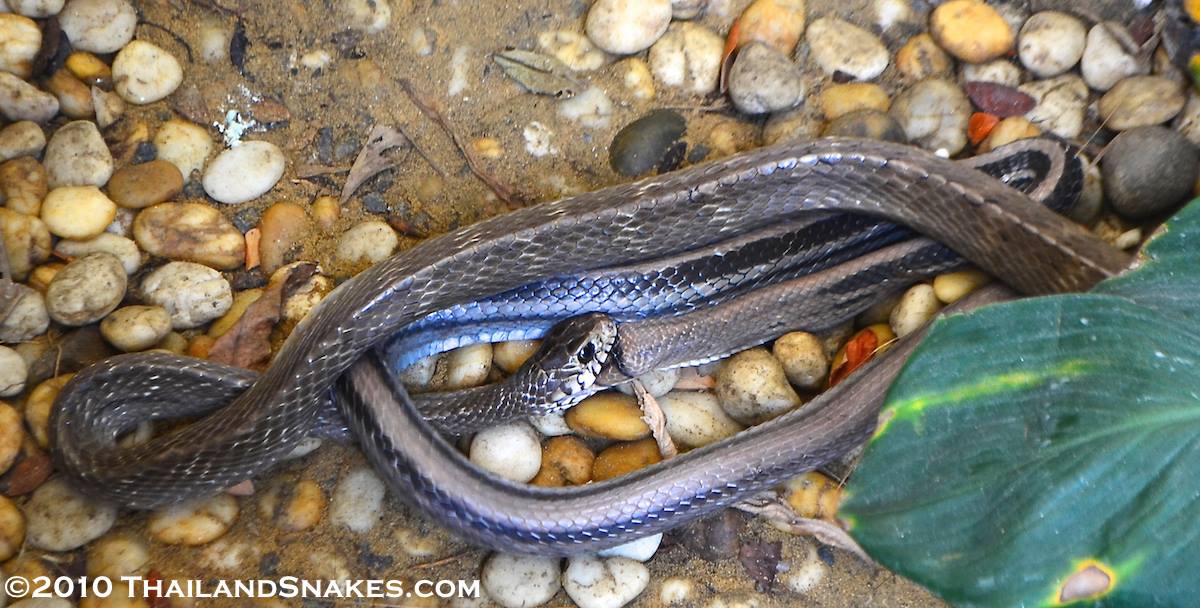 Range: Throughout Thailand, and common in Hua Hin area.

Habitat: The Oriental Rat snake prefers open forests, and at times comes into residential areas. I have had a number of ID requests for these snakes found in gardens. It is terrestrial, and arboreal, but spending most time on the ground.

Active Time: These snakes are active during the day and at dawn. At night the snakes can be found sleeping in loose rolls on bushes and in the branches of trees.

Description: Long, thick snake somewhat resembling and possibly mistaken for a king cobra. There are distinctive black lines on the lower jaw which are distinctive. The snake is brown bodied, with light bands on the base of the neck and mid-body, turning to black bands toward the tail.

Food: An opportunistic feeder, P mucosa eats rodents, lizards, frogs, birds, and other small animals, The oriental rat snake has a triangle cross-section with a well-defined vertebral ridge which can indicate it may be a snake eater. While at the Queen Saovabha Snake Institute in Bangkok, Thailand I took a photo of this snake taking the head of Coelognathus radiata (radiated rat snake) into its mouth and then letting it go. If hungry, it is certainly big enough to eat a 2 meter long C radiata.

Large snakes of this species do not have venom, nor do they constrict prey. They simply crush them with their body weight. This snake often eats prey while it is still alive.

Defensive Behavior: This snake is not a big biter, despite its size and significant strength. Some bite, some don’t. Rat snakes have some flexibility in how they strike, and can do so from many different positions. They need not rear back to strike.

Danger: Danger of a strong bite which may get infected. No venom or delivery system.

Offspring: Mating takes place between April and June typically. Approximately 60 days after successful mating females lay 6-18 eggs. In approximately 60 days the young hatch. Length of hatchlings is between 36-47 centimeters and the snakes are very light brown. (Info primarily from Siam-info.de)

Notes: Unfortunately we don’t get these in Krabi province. I’ve never seen one dead on the road, never seen one in the wild, and never fielded any ID request from someone locally who had shot a photo of one.