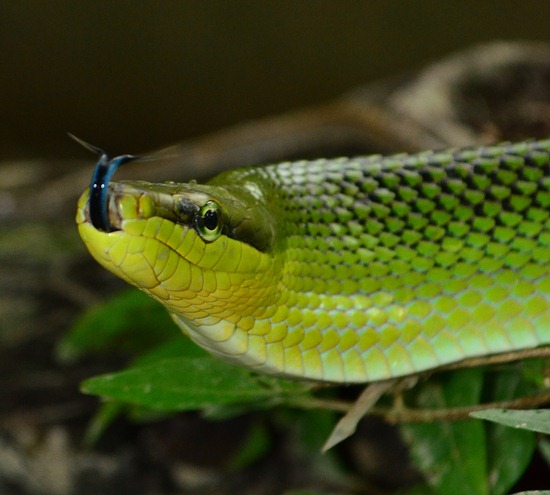 These Red Tailed Racers are beautiful green snakes (งูเขียว) with a grey or reddish tail. They are non-venomous but big enough to give you a strong bite. These snakes live for about 15 years on average – if they don’t encounter a predator like the King cobra.

Length: Max length about 2.5m (7.5+ feet) They are thick like your wrist and very strong, muscled snakes.

Range: All over Thailand.

Habitat: Red-Tailed Racers prefer lowland and up to about 750m above sea level in jungle, agricultural (farmed) land, mangrove forests. They spend most of their time in trees and bushes.

I have found these climbing wooden steps on a nature trail in dense Thailand rainforest and on the edge of residential developments. I’ve removed them from homes, porches, and garages. They don’t seem to mind being in open places where hawks or eagles might prey on them. I think they’re perfect green color on the dorsal (top) protects them from most predators.

Notes: These are common tree snakes that are also found in caves. They have beautiful greens, with white and black mixed into their main body color. Their belly scales are rough and ideal for climbing trees.

Their top scales are smooth. Identified easily by the dark streak across the eyes, and, if you’re close enough – the blue tongue that flickers in and out when aggravated. The tail is not always or even usually red… the ones I’ve seen are grey. They don’t always do well in captivity and can strike at any time, though usually much more when aggravated first.

Defensive Behavior: They flare up their bodies vertically – not horizontally like the cobras. They puff themselves up vertically and turn this part sideways to you so they can strike fear into you. They do bite when pestered. They can strike from nearly any position, head facing away from you too. Be careful they have strong jaws.