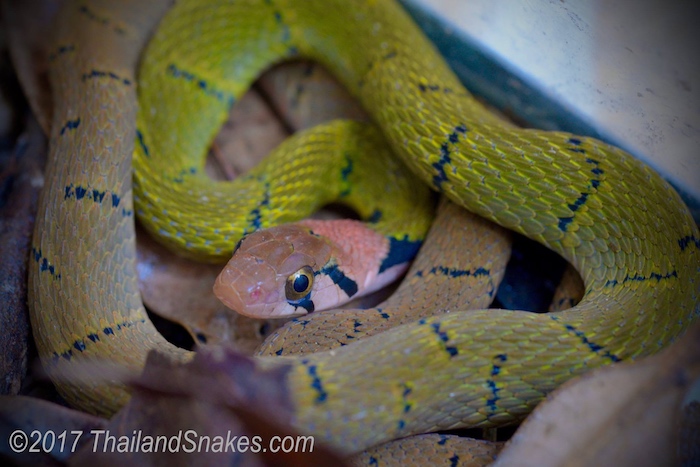 Snakes in Thailand You May See

When visiting Thailand on vacation or for a long-term stay there are certain snakes you are likely to see and others that you will probably never see, even if you’re looking very hard to find them. On this page is a selection of common (frequently found) snakes in Thailand. If you want a FREE EBOOK of COMMON THAILAND SNAKES in PDF format – CLICK HERE.

If you need the ultimate headlamp for herping – this Petzl Bluetooth programmable headlamp is one of our best:

This snake is almost 2 meters long when fully grown, and resembling the vipers – except it’s too long to be a viper. Be very careful with any green snake as there are many vipers with strong venom that are green and look very similar to this one.

Green vipers typically have brown colored tails. This snake has a solid green tail. The Green Cat Snake shown in the photo is harmless, and didn’t even try to bite as I interacted with it on my porch in Southern Thailand around midnight.

One rat snake, the Indo-Chinese Rat Snake, is especially common, but the adult does look very much like the monocled cobras to the untrained eye. Do be very cautious of any snake that is solid brown, grey, black, or that is mostly dark with some white spots – speckles or odd pattern. Cobras are quick to bite and one of the most deadly daylight snakes you’ll encounter. There is a photo of the monocled cobra below.

This is a fairly large rat snake reaching around 2.1 meters in length. It has no fangs to deliver venom, and can be considered harmless for humans. It does bite, of course, so stay out of reach. This is an incredibly beautiful snake with green hues, blue-green eyes, and black and blue tongue. Stunning!

If you haven’t yet read this book about Dr. Joe Slowinski – biologist bitten by a many-banded krait in Burma in 2001 – you really should. It’s an excellent read, and ALL SNAKE HOBBYISTS SHOULD READ IT.

Also called the Copper-headed Racer  – These are very common and may even qualify as one of the most commonly seen snakes in Thailand. Non-venomous and not dangerous, except they are big biters. Many small teeth.

A bite can hurt and get infected because the teeth easily break off inside the skin. Color hue ranges from yellow to brown, There is another rat snake in Thailand hat looks very similar – the “Malayan Racer” which is very dark brown with a slightly different pattern (Coelognathus flavolineatus).

Keelbacks are very common ground snakes and love water. You might see them in the water or on the ground moving around. Keelbacks are generally easily identified by distinct black (dark) lines from the eye area toward the jaw. Most keelbacks in Thailand are not very dangerous, but there are a couple in the “Rhabdophis” genus that are to be considered dangerous and potentially capable of a deadly bite. We have one featured in the venomous section below (Rhabdophis subminiatus).

A very common tree snake across Thailand, and their favorite food appears to be Tokay Geckos (Gekko gecko), so you may see one at your home. These snakes have a mild venom that doesn’t generally affect humans at all.

These snakes do traverse across the ground but quickly find a tree when threatened. Masterful and very fast climbers! Common in homes, garages, and other structures.

also incredibly adept and fast climbers, I first saw one as it came over my six-foot concrete wall in the back of the house in Surat Thani. Very thin snakes, not that afraid of humans. This snake bites quickly – as you might guess from the photo.

To be honest, I’m holding the tail so I can get a good photo before it quickly disappears. Mildly venomous colubrids, and not dangerous to humans. There are many species of this snake, all look vaguely similar.

Very common snakes, and usually found in trees during the day (active) or night (sleeping), but I have found many whip snakes on the ground as they hunted lizards and frogs. The bright fluorescent green in this snake is awesome, isn’t it?

These snakes have a mild venom, but again, no serious results of envenomation have occurred in humans. Other color variations: yellow, very light green with much more white (A. mycterizans), grey, brown. There is also a speckle-headed whip snake which isn’t found very often.

A very dangerous pit viper with strong cytotoxic venom which is potentially deadly. This common brown pit viper is the cause of death for more people in Thailand than any other snake. It bites quickly and is lazy to get out of the way if you’re walking toward it, usually, it just lays still.

Always found at ground level, and often on top of, or just under leaves. Maximum length – about 1 meter long.

Be especially careful of cobra snakes which can spit venom 2-3 meters away (farther with a strong wind!). They can temporarily blind you as they make their getaway, but the problem is your eyes will be burning until you can flush them with water for 10-20 minutes, and then visit the hospital to ensure they are properly cleaned. Photo above (click to enlarge) is of the Monocled Cobra (Naja kaouthia)

Brightly colored and very common snakes that become more brightly patterned when agitated. These brightly colored snakes are found in captivity across the globe. They were previously considered non-venomous and not dangerous until recently. Death has occurred as a direct result of envenomation from this species, though not in Thailand.

In Thailand, we have had a number of close calls. Renal failure after bites is one of the possible potentially deadly outcomes. This is one of the few snakes which is venomous and poisonous.

There is a poison secreted in dorsal (top) side of the neck area near the head which can be dangerous to pets or people licking them. You know, in case you ever got the urge. In some cases, the Red-necked Keelback can spray the poison from the neck in a very fine mist.

Malayan Krait. Kraits are all venomous and potentially deadly. They are active by night for the most part, though I have seen Red-Headed Kraits (Bungarus flaviceps) active during daylight twice.

The Banded Krait and the Malayan or “Blue” krait are both deadly snakes – the former with yellow and black bands about the same thickness, and the latter with black and white bands, the black bands are thicker near the neck, and more evenly spaced farther down on the tail.

Small-spotted Coral. There is one frequently seen coral snake in Thailand worth mentioning, not because it’s all that common, but because it tends to be around the gardens – even in potted plants. This is the “Small-spotted Coral Snake.” It is very small – around 35 cm as an adult, and it looks harmless enough. It should be considered dangerous – and capable of potentially deadly bites.

Venomous Snakebites and Near Misses