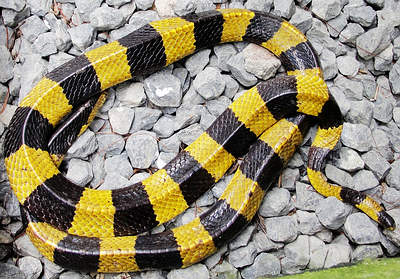 These are yellow and black kraits here in Thailand. In some other part of the world (Borneo) they are black and white. There are also “Blue Kraits“ aka “Malayan Kraits” which are black and white. And the really incredible looking Red-headed Krait which looks nothing like either of them.

Thais say: (ngoo sam lee-um, or ngoo kan plong) This is a bit confused in Thailand where in southern Thailand any viper is known as Ngoo sam lee-um. Lee-um means triangle, and so some people confuse triangle-shaped heads of the vipers with triangle cross-section of the kraits.

Range: All over Thailand and most of Asia. Never found in Krabi province, oddly enough.

Notes: Banded kraits are secretive, meaning they are mobile at night and prefer grass or other greenery to hide them. I have seen a few dead on the roads – but I don’t go digging up ratholes or termite mounds. I may start if I don’t find one soon.

I’ve been looking for three years to find a krait with yellow and black bands like these.

At dinner last night I was looking around a small restaurant with many ponds, for snakes. I asked the owner’s son if they had seen any. He said, Ngoo Sam lee-um. That could be the one. I’ll get their permission for some late-night herping and try to bag one.

I’m sure they’ll appreciate it. This restaurant is located on a small hill close to sea level in southern Thailand. There are many frogs at the ponds, and probably many snakes too.

Update 2021- I’ve been to that restaurant numerous times and not had a call from them about this krait. I am not sure they have been found in Krabi. I have never found road kill B. fasciatus here in Krabi.

I have found a large 2 meter dead on the road banded krait in Surat Thani on the main highway leading to Krabi.

Habitat: This Thailand krait lives on the ground and in rat holes and termite mounds, under stumps or rocks and in other cool, damp places. Recently I saw photos of one in some limestone rocks here in Thailand. They prefer wide-open areas near water.

Rice fields and mangrove areas are the best places to start looking for them at night.

They have been found as high as 1,524 meters in Malaysia and about 2,300 meters in Thailand.

Active Time? The snake is mostly nocturnal and is quite active at night. Most bites occur at night, as the kraits move close to people sleeping – usually on the floor, and probably the person moves and the krait bites. More dangerous at night, during the day they are not biters. These kraits are common in the northeast Thailand provinces.

Recently a six-year-old boy was bitten and could not be revived. The snake had come up into their home in Surin to escape some flooding.

Food: Other snakes almost exclusively – rat and cat (Boiga) snakes. In captivity, I have seen them eat the following live snakes: Calloselasma rhodostoma, Chrysopelea ornata, and Gonyosoma oxycephalum. One noted herpetologist states that these kraits don’t like to eat water snakes.

Defensive Behavior: The banded krait is slow acting during the day, lethargic, and usually not interested in striking. However, it can protect itself quite well – it is a strong biter and has been recorded as killing a large type of cattle 60 minutes after a bite.

Venom Toxicity: Very toxic. Deadly. This yellow/black banded krait from Thailand appears to have venom that is very toxic to humans. The typical LD-50 studies to assess the toxicity of venom in mice, rate this as a very toxic venom as well.

These snakes rarely bite during the day, but if they do, they can transfer enough venom to kill you. I read about a person dying in 30 minutes, and another dying in 15 hours.

A famous American herpetologist, Joe Slowinski, was killed by a baby krait (Bungarus multicinctus) in Burma while on a remote expedition. He finally succumbed after 30 hours. They can be quite deadly.

The cause of death is that your muscles are paralyzed and your diaphragm can’t work any longer to pull oxygen into your lungs.

Kraits are very deadly in this regard. However, if you are able to get to a hospital with a ventilator you will likely be OK. There is no specific antivenin for snake bites from this snake, but polyvalent venom is used – which can also treat bites from Naja kaouthia and Ophiophagus hannah.

Interesting to note… when fed on a live garter snake the krait venom acts instantly to cause death. Apparently krait venom is very efficient with snakes – the krait’s primary diet.

Handling: The banded and Malayan blue kraits are not known to bite during the daytime. However, at night time they bite rather easily, as evidenced by the numerous krait bites that occur at night to people usually laying down to sleep on the floor either outdoors or in their homes with the door open.

I would never handhold kraits like the man is doing in the photo above. The krait venom is so toxic, it’s just not worth the risk – however small.

Update: I was contacted by a man who was bitten by this same type of krait during the night (midnight) at an impromptu show at a bar in Bangkok. The snake handler let him hold it and it bit his arm deeply. He was lucky to live and had lingering effects for more than five years after the bite!

Antivenin:  Polyvalent. It is advised by experts to get antivenin in your bloodstream for krait bites before you have symptoms because once symptoms develop you may have lost nerve functioning that will likely not return.

Offspring: Mating in March-April and 4-14 eggs laid about 60 days afterward. The mother krait remains with the eggs for another 60 days before they hatch. Baby kraits are about 30cm long at birth and have venom.

I couldn’t find in the literature whether the mother left the eggs as they started hatching – so she didn’t eat them herself or not. The King Cobra does this instinctively because it also eats other snakes.