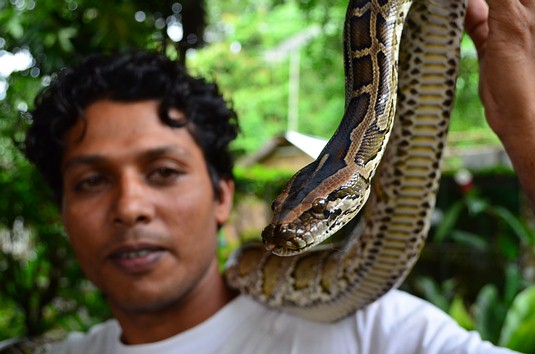 Not the Indian Python or the Indian Rock Python, but, the Burmese Python… Python molurus bivittatus.

These snakes are common in southern Thailand. Their coloring can be more on the lighter side or darker side, this one is rather dark. These snakes can get very large – approaching 30 feet. In the Everglades in southern Florida, once captive Pythons like this Burmese, have been let loose and have thrived in the hot climate. They are now attacking alligators and other wildlife, not to mention the occasional human being.

The Burmese Pythons have a temperament that is somewhat more even-keeled than the reticulated Pythons – in general. There are also some very keyed-up Burmese Pythons that will take a hunk out of your flesh if you get too close. Here at the snake park they have about 8 Pythons – 3 of which can be handheld.

If you come to Thailand, the chance that you would see a python in the wild is VERY small. You would need to go looking for them. They love living in trees during the day and are active at night eating anything from frogs to goats.