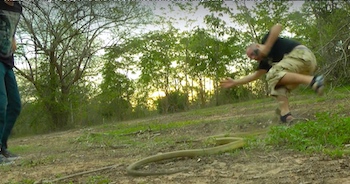 A king cobra let out of the bag for photos – almost turns deadly!

Be careful up there guys!

He thought he was far enough away that the king couldn’t come in that fast. Unfortunately, this king was energized and quickly flipped back for a bite at the crotch.

Then, when it missed, the mouth is still open looking for something to bite. It was not happy at all.

I handle king cobras very, VERY rarely. In the open area like this the king can move quickly because there are some plants and uneven ground it can use to grip the surface. It’s nothing like a road or flat, smooth dirt spot.

So glad these guys are alright!!