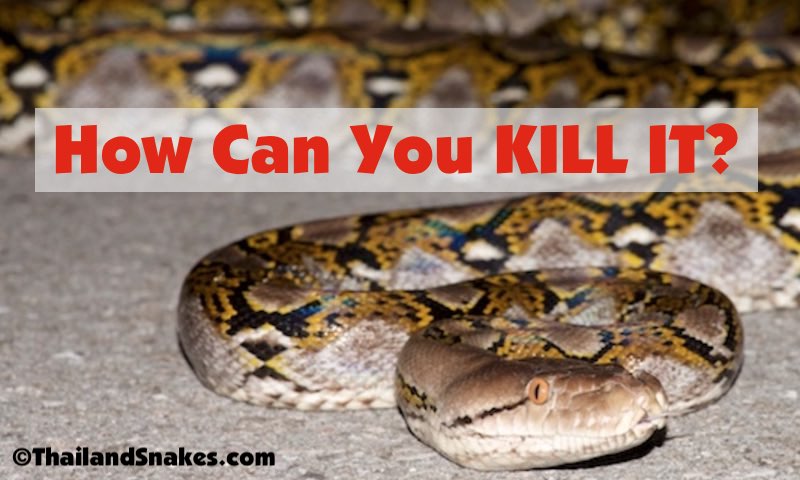 I think about this scenario far too often, I’m looking for snakes at night and I step past a rock and a large python attacks me. There have been a couple of times I have been near thick foliage and undergrowth, and heard something coming closer to me. I couldn’t see it, but it was in there.

Ha! I sound paranoid, right? You spend 3-8 hours in Thailand’s rainforest by yourself and see what your mind does.

HOW CAN YOU KILL A PYTHON?

You could sever the spinal cord at the neck and stop the python contracting around you. A deep cut to the neck would probably sever some arteries and could help to bleed the snake out.

Pythons Get So Big They’re Scary

Reticulated pythons and Burmese pythons are the big snakes in Thailand that can kill you. Here in my area, we have the retics. I’ve seen one between 6-7 meters long. I’ve seen one eat a goat. They can certainly eat a small-framed human being.

I do fear something hunting me though. Tigers, leopards, bear, and big pythons.

What to Do When a Python Tries to Kill You?

How can you fight a python? Recently a rubber tapper in Indonesia went out alone at night to collect latex from the rubber trees in the plantation. He didn’t come back. Friends went looking for him.

They found him in the stomach of what they said was a seven meter long Reticulated Python. That’s a big snake. People were incredulous, could it REALLY eat a person?

Are you KIDDING ME? They can eat ALLIGATORS. What makes you think a person is any different?

Wait, here’s the best line from the entire BBC article which covered this story… “Pythons rarely kill and eat humans, although there are occasional reports of them swallowing young children or animals.”

Wait, there are “OCCASIONAL reports of them swallowing animals? There are thousands! Happens thousands of times everyday. Pythons eat dogs, cats, birds, chickens, pigs, alligators, small deer, and many other animals!

Here’s something else dumb they said, “Reticulated pythons are among the world’s longest reptiles and suffocate their victims before swallowing them whole.”

Just a few minutes of research would have turned up the fairly recent study that shows that people who die as a result of python attack, die because their blood pressure raises so high – that the heart cannot beat. The heart is stopped and death occurs. It isn’t asphyxiation that is the cause of death.

So, the purpose of this article is to entertain WHAT TO DO IF A PYTHON HAS BITTEN YOU – AND IS WRAPPING AROUND YOU QUICKLY.

How To Survive a Python Attack?

That has been my plan for about the last fifteen years. I’m not sure if it would work. I’d like to have a better plan. If you can think of one, DO LET ME KNOW.

Some other ideas… and yes, these are bad – horrific – but, if you’re in a life or death situation, you need to do whatever you can to stay alive, right? I mean, who wants to become snake food.

More Ideas to Help You Survive an Attack

Anyway, that’s what I came up with.

WHAT DO YOU THINK IS THE BEST IDEA to SURVIVE a PYTHON ATTACK?

TELL ME WHAT YOU’D DO…

60 thoughts on “How To Survive a Python Attack – What To Do?”