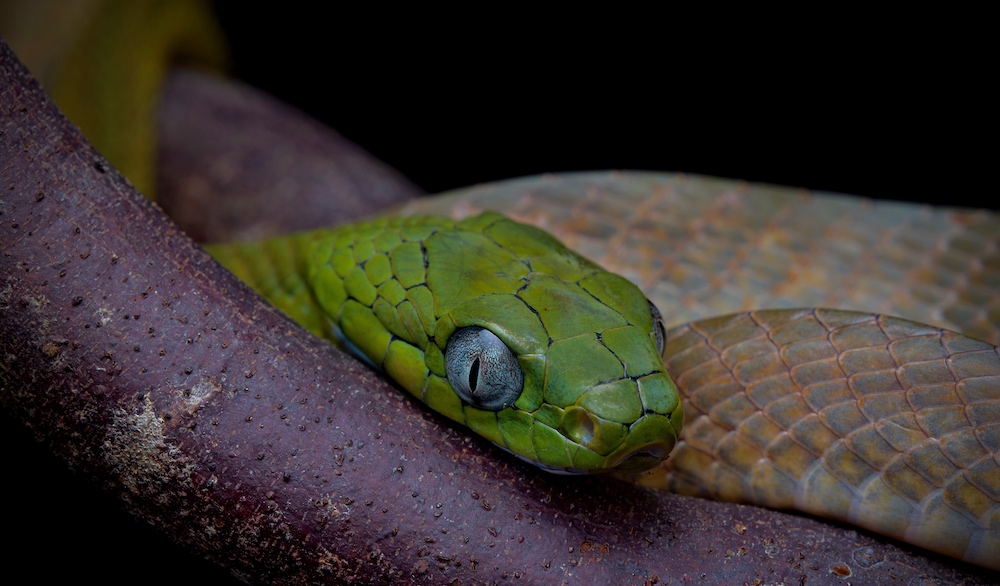 Description: This is a long, slender green snake (งูเขียว) with a vertically compressed body (shallow vertebral ridge). It is overall green, with a blue tint to it. The eyes are large with vertical pupils. The chin and throat are blue-white. The inside of the mouth is black. Young snakes of this species are brown / red hued with a green head.

This snake is nocturnal and arboreal, but can often be found on the ground as well.

Range: Thailand-wide. Found in evergreen forests, but also found in housing developments. The first one of this species that I found was on my porch at midnight, using my motorbike to reach higher on the windows for geckos. When I followed it, it climbed a small tree and rested about 2.5 meters high until I left the area. Found in a variety of forest types up to 2,100 meters.

Habitat: Bushes and trees.  This snake is an excellent climber.

Food: Geckos and other lizards appear to be its primary food source, but they will also eat small mammals, birds, eggs, other snakes, and frogs.

Defensive Behavior: I have not seen this snake strike often, they calm down with gentle handling very quickly. Usually, they are very calm.

Venom Toxicity: Weak or none. Rear fanged, and the fangs are small and it is not easy for the snake to get a good grip to chew in the venom. That said, at least one instance of significant envenomation has been recorded. Don’t attempt to hand-hold a snake that is biting.

Offspring: Nothing known about this area.

Notes: These are great snakes for first-time snake hobbyists to handle for a short time in the wild. If they are striking initially, they quickly calm down when held for a short time. There is a very real danger of misidentification of a small non-venomous B. cyanea with one of the venomous green vipers.

Video – Green Cat Snake strikes at the camera (not expecting it)