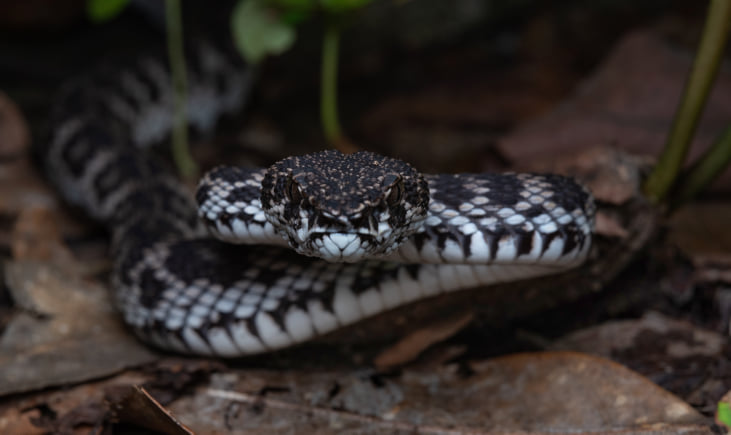 This is the longest venomous snake on the planet, and they get to around 6 meters long (19 feet!). The King Cobra length isn’t the scary part, it’s the amount of venom they can inject with one bite – which can kill an elephant. The brother of a friend I have was killed by a bite to the chest while doing a snake show with a king cobra. He died in less than 10 minutes. Kings are rather slow to bite, but if you are within striking distance, and they think you are a threat, they might feel threatened enough to strike.

These are usually quite dark brown, black, or dark grey snakes that are very fast strikers and movers. The Monocled Cobra’s venom is much more lethal than the King Cobra’s venom, so only a very small amount is needed to cause death in humans.

I met a woman who lost a husband recently, due to a bite on the man’s toe when it came out from under an outdoor refrigerator as he opened it to get a beer. The venom is both necrotoxic and neurotoxic. First the man who was bitten lost his foot to necrosis. Then up to his knee. Then his entire leg, and the doctor assured him and his family – he would be fine now.

He died days later. Monocled cobras are quicker to bite than king cobras and are exceptionally dangerous. Do not mess with this snake.

Naja kaouthia just might be my favorite snake… Monocled Cobra.

Banded Kraits are yellow and black snakes which are active at night. During the day they are usually quite docile. Some are foolish enough to hand hold them during the daylight hours. Show this snake more respect, its venom is quite lethal and kills people each year in Thailand and other countries in Southeast Asia.

Bands can be yellow and black, white and black, or even with longitudinal (yellow adn black striped) instead of banding due to genetial anomaly.

Stronger venom than the Banded Krait, but not as lethal as it’s sister – the Multi-banded Krait, that looks very similar. Malayan Kraits are generally not interested in biting, but they have one of the most toxic venoms of any snake. Extreme caution is recommended.

The Red-headed Krait, is seen as often during the day as at night. These ultra-lethal venomous snakes are quite rare to find at all. I have seen just two in more than a decade of looking for snakes in Thailand. Most people never see one in the wild. Their venom and behavior has not been well-studied but their venom is very toxic, like the other kraits.

A small, less than 10-inch snake called Bungarus multicinctus killed famous American herpetologist, Joe Slowinski while he was on an expedition in Burma and far from a hospital with respirators. He died within 30 hours from the Many-banded Krait bite. These snakes have venom which is in the top 5 of the most lethal territorial snakes in the world. These snakes look very similar to the Malayan Krait, but they have more bands.

HAVE YOU READ THIS SNAKE BOOK YET? HIGHLY RECOMMENDED!
One of Top Snake Biologists in the World is in Burma and is Bitten by a Krait… Great Story!

These snakes have the distinction of killing the most people across Thailand of any other snake. Malayan Pit Vipers have large heads, very large fangs, and a strong bite that can inflict deep wounds filled with venom. These snakes love the grass and light cover. They tend not to move at all when approached, and don’t give any noise before striking. Usually people die when they don’t get hospital treatment quickly. The venom is primarily hemotoxic and the victim bleeds from orifices on the body – as well as from the brain.

Found north, west and east of Bangkok – this snake is not to be found in southern Thailand. Siamese Vipers kill more people across the globe than any other. Like the Malayan pit viper these vipers are very strong, thick, and have large fangs.

And she is a beautiful snake too! In the header of this website is a photo of what I think is the first venomous snake I saw in Thailand – the Trimeresurus venustus, the Beautiful Pit Viper. These are small vipers with very small scales – especially on the head. They are not so deadly, but you will have strong local reaction to the venom.

The image I use in my header at the top of this page is also the T. venustus – Beautiful pit viper.

Very rare and found only in and next to the Kanburi province of Thailand. Very similar in appearance to the beautiful viper.

Wagler’s Pit Vipers are common in Phuket, and called by some, “The Temple Viper.” These are incredibly stunning snakes to look at. Their patterns are diverse. The photo above is a female. The male is about 1/4 the thickness, with a green overall color and red/white spots.

Sorry, no image could be found.

A father sent me photos of a snake that his young son was kicking at while they visited a waterfall on the Thai-Burma border in Phang Nga province. These are rare in Thailand, and have a nasty bite. Luckily, his son was not harmed.

These are pretty elusive. They spend time in mangrove areas near the ocean, and I’ve yet to see one in the wild. They are big biters and not docile at all. Be careful if you come across one of these small vipers. Mangrove Pit Vipers are beautiful – but dangerous.

As the name implies, the eyes are large on this green pit viper. Green pit vipers in Thailand are quite difficult to tell apart from each other. Be careful with all of them.

Very dangerous and hard to identify. A very beautiful pit viper as the pictures show.

Get your copy here >

I Love these Headlamps for Herping

My Favorite Gear for High-rez Video