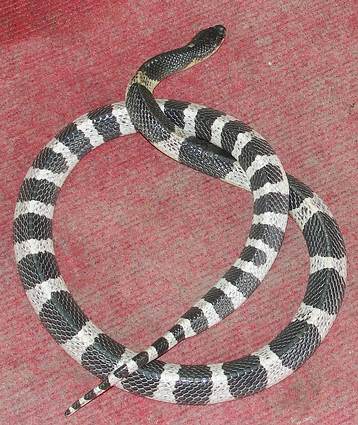 One of the biggest problems (and dangers) of herping in Thailand is not knowing which snake you’re looking at. There are many snakes which look close enough to each other and can be misidentified. The black and white snakes are probably the most difficult to distinguish because when juvenile, they can look quite similar in appearance. White snakes are near impossible to identify!

I myself have had a horrible experience where I misidentified a black and white sub-adult blue krait as a juvenile Laotian wolf snake. When I turned around, a friend had it in his hand. Talk about a nightmare! I had seen dozens and dozens of kraits before that, and still, because of where this black/white snake was found I figured it was a harmless wolf snake. I had never found a blue krait in this spot before, only wolf snakes. It was a real eye-opening experience!

Black and White Snakes (as adults or juveniles)

Deadly snakes in the list above are marked with an asterisk (*).

Black and white snakes are rather easy to notice especially when they are moving because if moving slowly, their body pattern is like a waving checkered flag at the F-1 races. Isn’t it?