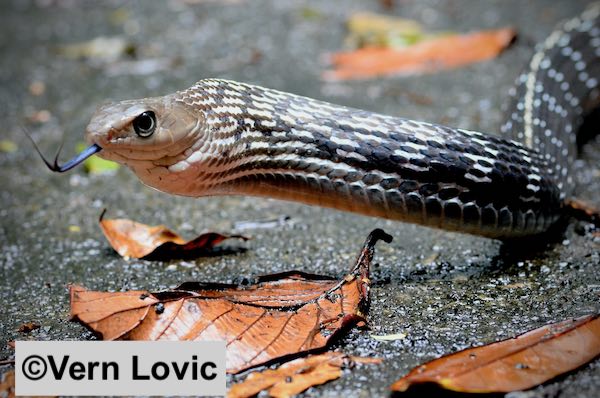 Here are some Thailand snake statistics I’ve compiled from data I have collected over the past 14 years. Data sources have come from surveys and questionaires, and personal experience in Thailand looking for, catching, and handling snakes in the country.

How Many Snake Species are in Thailand?

228 at last count. This includes ocean and freshwater species as well. All breathe air. All are snakes. The water snakes you’ll see mostly in the water. Some come to land for laying eggs.

Does Thailand Have More Snake Species than Any Other Country?

What Percentage of Snakes in Thailand are Dangerous and/or Deadly?

15% of known Thailand snake species are known to be dangerous (medically significant bites) and some are capable of deadly bites.

What Percentage of Snakes Worldwide are Dangerous or Deadly?

Are Snakebites from Dangerous Snakes Common in Thailand?

Yes, snakebite in Thailand is common. The group most affected by snakebite from dangerous and potentially deadly snakes are agricultural workers who are frequently in contact with green and brown pit vipers, cobras, and kraits.

What Percentage of Snake Bites are “Dry Bites”?

A dry bite is when a venomous snake bites but does not inject a significant amount of venom. Sometimes no venom at all is injected. The percentage of times this happens varies according to snake species and individual snake behavior as well. The range I’ve heard over the years is from 30% to 80%.

This means that even though a dangerous snake bites you, there is a 30-80% chance that the bite will not have enough venom to cause you significant harm.

How Many People Die in Thailand Each Year Due to Snakebite?

We may not be able to come up with a valid number here for reasons I’ll not explain. The number of deaths in Thailand per year due to snakebite is from 5 to 500 depending who you believe. That’s as close as we can really come to the true number.

Monocled cobras are probably responsible for more deaths each year than other snake species. Malayan pit vipers, banded kraits, Malayan kraits, and green vipers are in the top 5.

What Are the Chances that a Person Will Die if Bitten by a Snake in Thailand?

If you are quickly taken to a hospital, even a bite by the most deadly of venomous snakes in Thailand (kraits, cobras), you’ll almost surely be fine. Recovery is near 100% with proper medical care.

Thailand’s public hospitals are required to have antivenom (antivenin) available to treat bites from the most toxic snakes in the area surrounding them. Even if the hospital you go to doesn’t have the exact antivenin, they can quickly source it from another location usually within 24 hours.

If Bitten by a King Cobra, What Are the Chances a Person Will Die?