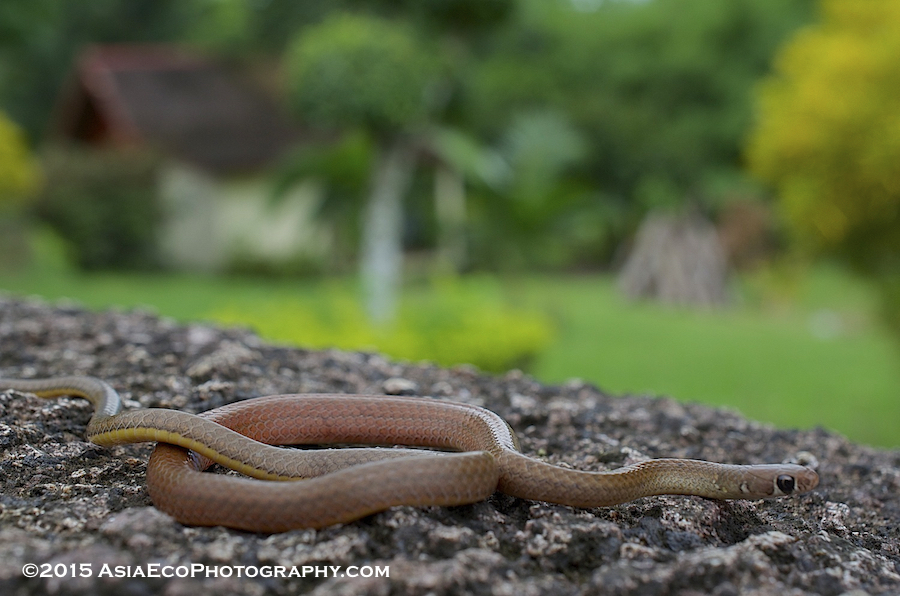 Range:  This beautiful snake is found in deep southern Thailand at the Malaysia border, Krabi province, and Southeastern Thailand. Other countries: Malaysia, Singapore, Brunei and Indonesia.

Habitat: Found in leaf litter at some elevation. We found two specimens, one at 100 meters and one at 470 meters above sea level. The first was found at night sleeping on a low branch of a small bush. The second was found in leaf litter near a very small stream. IUCNRedlist.org limits elevation to around 600 meters, some sources say up to 1,500 meters.

Description: A small, very thin snake with the head indistinguishable from the body. Average adult size is probably 40 cm. The there are multiple patterns on this snake, but generally the top is brownish red and the ventral is cream colored toward the head and bright yellow at the tail. On the neck dorsal is one dark spot pair on opposite sides of the vertebral column. These extend to about mid-body. The eye is very large for the head, larger even in comparison to Ptyas korros. The head pattern is intricate and the head is very small. On the dorsal from the neck to mid-body are two dark red and thick stripes which merge near the tail and become one color, darker brown. There are also two dark lateral lines, one on each side, running the length of the snake. The anal shield is split. The tail ends abruptly in a nub.

Defensive Behavior: This snake wasn’t observed to be defensive, or even attempt to bite during rather extensive handling. When fleeing, the snake zig-zags very fast and every now and again attempts to jump with the front part of the body. I thought I was getting this on video, but my finger had inadvertently hit the stop recording button. One thing I noticed with the most recently found snake was the nubby tail was waved around as if it was a head. This could possibly be a defensive behavior to lure predators toward the tail.

Notes: There is very little information about this snake online despite exhaustive searches.

I have also seen this snake called Gongylosoma baliodeirum and called the “striped ringneck” in the book, A Field Guide to the Reptiles of Thailand. The image they show for the the snake is completely different than the snake shown above. See next image – a screen shot from my phone where I have the ebook.

The snake is not covered at all in “A Photographic Guide to Snakes and Other Reptiles of Thailand and Southeast Asia.