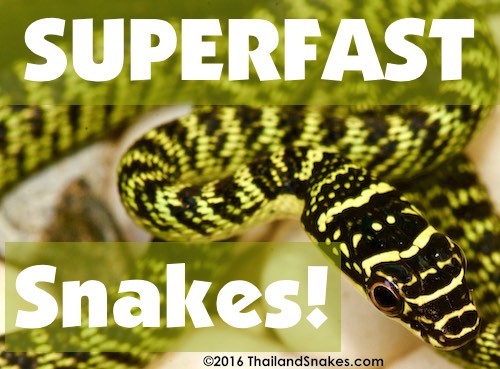 The sidewinder rattlesnake (Crotalus cerastes) has been recorded moving as fast as 18 mph (29 kph) and is generally recognized as the fastest snake in the world. When they move their body they whip it around and actually leap into the air a bit!

Did you ever watch marathon runners on television running the New York City Marathon? They’re running so fast, right? If someone could run a 2 hour marathon, they’d be averaging 13 mph. The sidewinder goes 18!

Another very fast snake is the black mamba from South Africa (Dendroaspis polylepis) which can reach speeds of 16-19 kph (10-12 mph).

The fastest striking snakes are said to be pit vipers. I’ve looked for a comprehensive study on the speed of pit viper snake bites and cannot find one, so I won’t choose a winner here. The rattlesnakes of North America are certainly very fast. So are the taipans of Australia and the green and black mambas of South Africa.

There are thousands of snakes in the world. Many of them can strike VERY FAST. Let’s leave it at that!

Living in Thailand for 18 years and chasing snakes for 15, I’ve been able to witness a lot of fast-moving snakes on the ground and in the trees and bushes. The fastest snake I’ve ever seen moving on the ground was a 1.5 meter long Indo-Chinese rat snake (P. korros) that disappeared into some low vegetation with a speed that I couldn’t even believe.

These are lightweight snakes that have very fast muscle twitch fibers so they can easily escape predators or chase down prey.

Fast Snakes in the Trees

The fastest snakes I’ve seen in trees and up off the ground have been the Golden Tree Snake (C. ornata) and the striped bronzeback (D. caudolineatus). I’ve seen both of these snakes move up into a tree and disappear over my head so fast I wasn’t sure I was even following the movement of them. My eyes couldn’t catch up!

To be honest, I’ve never seen a snake in the ocean. I just don’t go snorkeling or diving in Thailand much at all, and never in areas where I can see some of the amazing marine snake species.

Watching videos of friends who’ve spotted snakes in the water it seems like ALL water snakes are quite quick and capable of fast bursts of speed. Their paddle-like tail helps tremendously to propel them quickly through the water towards prey or away from predators and curious divers.

Which Snake Kills You the Fastest? Find Out >

No. Snakes are only concerned with getting away from people as fast as possible. Sometimes they feign a strike and quickly turn to get away. Monocled cobras do this often.

The larger snakes may appear to be chasing you as they strike to defend themselves because they are large and need to move considerable mass forward during the strike.

A king cobra strikes while lunging forward and down to let gravity carry the weight down and forward. The entire body may move forward as it strikes.

I’ve never seen a snake come toward someone purposefully to chase for a bite.

Here’s a video of a guy taunting a king cobra who hides. Then, out of nowhere, attacks!