I’ve had this survey up MUCH too long, but I rarely saw it there on the bottom left side of the page so it was pretty much out of mind.

Below is a graphic for the results after 126 people voted on which is the most common Thailand Snake: 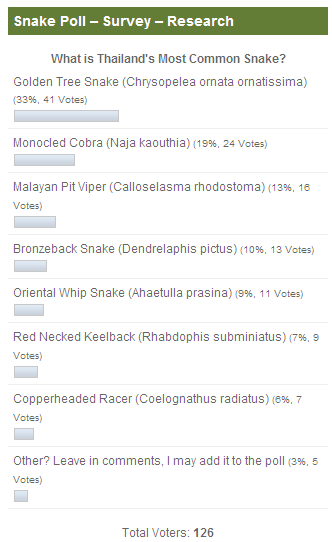 The golden tree snake took first place – and I understand why. There are quite a few of them in Thailand, and if you’re a tourist – these are the snakes you are most likely to see. Golden tree snakes can be found in the bushes outside your house, climbing the outside wall of your hotel, on your balcony, or in the rafters of your bungalow. I have found them in all those places and many more. These snakes are definitely one of the top 5 snakes you are likely to see in Thailand.

Other snakes that I think are in the top five or ten?

Brahminy Blind Snakes – I see these often in my home, near my home, and picking up logs in the forest. They eat termite and ant eggs – and there are plenty of those around, so plenty of these snakes. They often come right up the drain in our restroom.

Copper-headed Racers – these rat snakes are quite common, and if you have garbage near your home, you may have seen one. These snakes lay in wait for rats.

Indo-Chinese Rat Snakes – these are dead ALL OVER the roads in southern Thailand, and also the northeast where I lived before. I guess it’s because they are impulsive snakes. When they are on the move – they just GO, without thinking much apparently. I am sure i’ve seen more of these dead on the roads than any other snake.

Red-necked Keelbacks – these snakes are also – all over the place. I’ve seen them on the side of mountains, and crossing roads numerous times. I’ve found them in water, by water, in bushes just 6 inches above water, and many places.

Monocled cobras – I’ve seen a LOT of these in southern Thailand. They are very common here, and they don’t mind living under your house. This is one of the most dangerous snakes in Thailand, as their venom is very strong, and some of them are very good at tagging you if you’re messing with them.

Ok, that’s about it. I’ll come up with another reader poll in a day or so – have to think about a good topic.

If you have a good topic – do let me know.