Some of them are killed as they do so. Got contacted by a guy in Nonthaburi – they had 2 big rat snakes mating in their garden. They called the security guys for the housing complex who insisted these rat snakes were closely related to the cobras – and called Coconut snakes. What the hell?

They killed them both. You see how BIG that one is? 3+ meters… a fine specimen!

Snakes are mating during these months. Some of them are anyway. I think the king cobras and now I know the rat snakes are too. Probably whatever snakes aren’t hiding away from the cold. Today I had a look in a park in the northeast – all over the park – ponds everywhere, great little trees by the ponds – nothing. No snakes.

I’m giving up until I get back south. The northeast is just way too cold at the moment for snakes. 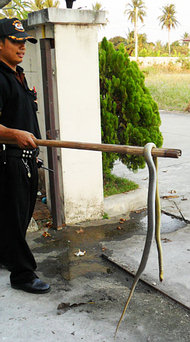 2 thoughts on “Snakes are Mating in Thailand at the Moment”